You are here: Home / Poisonous and Medicinal Plants for horses / European Yew – high toxicity for horses 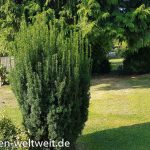 Almost all parts of the yew are toxic.

Especially horses are in danger of the poisonous substances. When needles, wood or bark enter the organism this can cause death. Even if the number of yews declined massively during the last decades there still are enough trees that represent a great danger for horses and other animals. 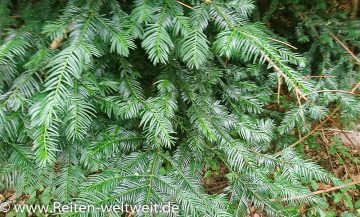 The Yew is an evergreen conifer but sometimes you can even find it in form of a shrub. The most characteristic features are the needles which have a width of 2 mm and a length of 3 cm. Additionally the tree has black and toxic seeds which are encased by a red aril. There is no clear botanical categorization of the yew. In opposite to all other conifers it does not offer any cones so that there still are some argues about the right and doubtless classification. However, the tree grows very slowly so that it can take more than 150 years until the yew reaches its end height. In general it can become 20 m high but in Europe you can hardly find a yew taller than 15 m.

In some countries the yew is on the IUCN Red List. This is caused through the massive deforestation in the last decades. The wood of the yew has a high quality and the timber industry prefers to work with it. Yews grow in deciduous forests and on calcareous soils. In addition to this more and more people like to plant this tree in the garden or in public parks.

Toxicity for horses and other animals

Seeds, needles, wood and bark contain the toxic substance taxane. The individual concentration of the taxanes differs from the part of the tree and the season. It is important to know that the red aril does not contain any toxic substances so that it is not dangerous. A poisoning is only caused if the horses eats (and chews!) the black seeds! In this case the toxic substances enter and become set free in the organism. They attack the alimentary organs, as well as the nervous system, heart and liver. Horses especially are affected by the danger of the yew. A dose of 100-200 g leads to death in only 5 minutes! Indeed, it is really frightening how fast this toxic substance spreads in the body and effects a cardiac arrest. If humans only inhale the pollen of the tree, this can already cause a feeling of dizziness.

One especially needs to pay attention to the area around the pasture. You need to control that there are no yew trees and additionally no sawed off branches. In the past it happened that horses ate the sawed off branches and the rider found them dead on the pasture- only a couple of hours later!

Rescue is only possible with immediate treatment!

And also pay attention to poisonous plants when riding through the forest!