You are here: Home / Horse Training and Manners / Lunge Training Course – Field Report No 2 – Problems With Your Own Coordination

The first steps of the lunge training were easy and my horse and I became used to the units quite quickly. In opposite to this the training units of the last weeks were even more difficult. Lunging your horse in the right way does not only mean to teach your horse walk in a circle but also to coordinate your own movements.

The little picture above shows the way the rider should position his or her body – always towards the direction of the movement. Additionally it is a little help to put your weight on the leg which is facing the horse because if you do so you can easily keep your linear circle. The rider holds the horse near the cavesson so that he can influence the position of the neck. Generally it is important that

the rider stands next to the horses head because if he does not he probably pushes the horse backwards.

horse and in this case this would mean that he rider pushes the horse backwards. Now it can really take some time until the rider learns that now he has to stand next to the horses head. Nevertheless I often recognize that I still stand in front Granat and this especially happens when the horse becomes faster than I want him to go. 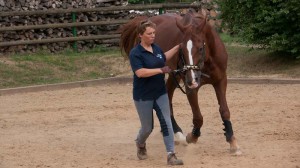 becomes really difficult if I hold whip and lunge in the same hand. But never mind – practice is everything.

These two pictures point out the mistakes a 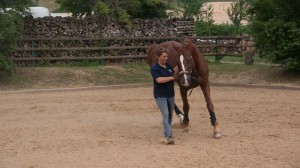 Additionally my horse and I have to practice a special discipline: here the rider guides the horse (the rider stands next to the face of the horse) and then the horse slowly begins to trot. Normally Granat is really good in this and it is no problem at all to guide him when he trots (I trot next to him). But if I become faster and start to jog he forgets his lowed head and the bended position of his neck. We have to practice a lot and I need to be really patient until it finally works out.

As you can see many aspects have to be considered so that I would even say that it is as if the rider has to learn riding from the beginning on. For me it was really helpful to make videos from my training units because they showed me my mistakes and the next time I knew what to think about.

Luckily Granat is quite relaxed and concentrated making it for me much easier to work with him. Even if I constantly have problems with my own coordination he keeps patient so that after some time our trainings become really successful.

However I learnt that the rider should spend a lot of time on practicing the basic training units. After some success in guiding the horse with an inner visual boundary I already let my horse trot and began to go on distance to my horse instead of staying just next to him. Naturally this did not work out. My horse and I both became impatient: I began to pull on the lunge so that Granate was really stressed. This taught me to go “back to the roots” what meant to practice the first steps of the lunge training: guiding your right bended horse.

inner boundary. Undoubtful for the beginning this is really helpful. The horse cannot push on the inner side towards the rider so that the horse has to follow the destined way of the rider. Nevertheless after some time it becomes important that the rider guides the horse without any boundary so that the horse just walks next to him in its bended position. The team will only achieve this if he practices without the boundary and then horse and rider will learn a lot.

During the next weeks I will go on practicing two things: guiding the right bended horse and the special discipline when the horse begins to trot while the rider trots next to him. If these two things work out quite well we will begin to practice the pass over. When Granate is able to execute all these single disciplines I will begin to combine them. Due to this hopefully one day Granat will be able to run at the lunge as well as the horses I saw at the beginning of the year. I know that there still is a lot of work to do and it will be a long way until Granat will walk that way I want him to do. But nevertheless I think that it is worth all the work and I will be happy about the great success. Especially I am happy about all readers who want to join my way.

On this link you can also watch a video of my training units: