You are here: Home / Poisonous and Medicinal Plants for horses / The poisonous plant Tansy

In former times physicians used this plant as a medication for horses which suffered from worms.

In general there always were immense side effects due to the toxic substances of this plant. Therefore one needs to avoid any contact with tansy.

Tansy is categorized into the daisy family and its flowers have a distinctive outward appearance: 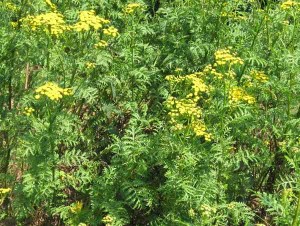 The flowers are yellow and have the form of a tube so that they can be associated with little buttons. The leaves resemble with the form of a flag. Moreover tansy is one of the so called compass plant because the foliage aligns to North or South (if a minimum of sunlight is shining on it). Originally tansy grew in whole Europe and Asia but until today it was able to spread into the whole world. This plant prefers loamy soils so that it often grows at waysides, bank sides or on fallow land. 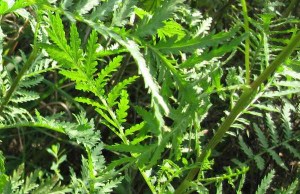 Generally this herbaceous plant grows up to 1,50m but in nature it mostly is not higher than 50cm – 1m.
The most popular characteristic of tansy is the smell: the flowers as well as all other parts of the plant provide essential oils at what thujone represents the biggest percentage. Opinions differ about this smell: some people really like it whereas other ones describe it as repulsive. Interestingly also insects avoid the smell so that some people use dried flowers and leaves as a defense against unwanted vermin. Tansy blooms from June to September so that it mostly provides the last blooming flowers of the year.

Originally people used tansy as a medication against horses which suffered from worms. However today we know that this plant is no cure and that one generally needs to avoid tansy. The use of tansy has immense side effects and a too high dose of it can cause poisoning. Therefore today there are plenty of substitutes which can be used in case of worm attacks. The simple contact with skin can already cause allergic reactions.

Further symptoms for poisoning are irritations of mucous membranes, drowsiness, reeling, and damage of the liver and kidney.

Some horses avoid tansy automatically due to the smell.