You are here: Home / Poisonous and Medicinal Plants for horses / St. James-Ragwort: Very poisonous and an acute threat for horses

The Lucerne Government declared St. James-Ragwort as an acute threat not only for horses and other grazing animals but also for humans.

Its toxicity and the rapid spreading of this plant make it dangerous and unpredictable.

The spreading and therefore the threat of the St. James Ragwort has already been discussed in the German Government and by European Politicians.

Since more than ten years the most dangerous species of all Ragwort plants spreads over the whole countryside and is a threat for animals and cereal stocks. Recently we know about dead horses which grazed this poisonous plant or consumed it by hay and silage. Therefore it is really important to inform about this plant so that there is a protection for animals and humans.

St. James-Ragwort is the most toxic and therefore most dangerous one

Even if all 25 species of Ragwort are poisonous the St. James-Ragwort is the most toxic and therefore most dangerous one. The poisonous substance Pyrrolizidine alkaloid is in all parts of the plant. After entering the organism metabolic processes form it into a poisonous substance which destroys liver tissue. 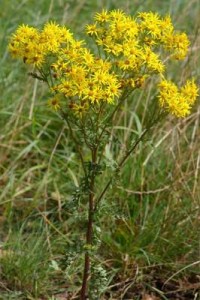 Its territorial spread takes place over high- and lowlands.

Especially pastures can easily be affected by Ragwort what clarifies the acute threat for horses and grazing animals. The plant grows up to 30 – 120 cm (in some cases even up to 180 cm). The yellow flowers have the form of a tube and bloom from the middle of June until the middle of August.

St. James-Ragwort is a biennial plant what means that the flowers do not bloom before the second year of vegetation. The St. James-Ragwort offers more than 150 000 seeds which easily can be spread by wind, car, humans and animals. Anyway this needs to be prevented so that this plant does not enter the food cycle.

Horses only graze the St. James-Ragwort when there is only less grass on the pasture and therefore when the food is limited. In these cases especially young horses eat the poisonous plant with the bitter taste. Additionally it is really dangerous when hay or silages have rests of St. James-Ragwort. Through the conservation the plant loses its bitter taste so that actually it becomes tasty for animals. Some people say that silage with rests of St. James Ragwort is less dangerous than hay. Until today this statement could not have been proved so that generally one needs to avoid any fodder which could provide the poisonous plant.

A poisoning causes irreversible and therefore not curable damages of important organs. In many cases horses offer symptoms of a poisoning some months after the consumption of the plant. This fact makes a medication really difficult and often it already is too late for a chance of cure. If toxic substances enter the organism they destroy tissue cells of the nervous system, liver, kidney and lung. Moreover the toxicant often causes any forms of cancer and damages genotypes and embryos. A high dose of St. James-Ragwort causes the death of the horse.

The prevention against a poisoning caused by St. James-Ragwort is only possible if one detects the origins of the spreading.

Preventing measures are grazing sheep on the respective pasture and the elimination of erosion and other damages of the grass. Generally you need to check the pasture regularly so that you can cut out the roots before the plant is able to germ. If Ragwort already spread over the whole pasture one needs to make use of chemical substances (only in cases with a great spreading of the plant!). In general it is dangerous to deal with any kind of chemical substances because they can easily endanger the health of the horse or of other animals on the pasture. Therefore one needs to inform oneself and may only use it when the weather is not to hot. If the pasture is part of a nature or any ecological reserve one needs to contact responsible authority which may need to allow the use of chemistry.

It is forbidden to put stems or flowers on the compost because there they can easily continue to germ.

The disposal of the St. James-Ragwort may not be random. It is forbidden to put stems or flowers on the compost because there they can easily continue to germ. Instead the only effective disposal is the incinerator (contact the respective local regulatory agency). If the continuous spreading of the St. James-Ragwort shall be stopped there need to be people who act and fight against it consequently and in a coordinated way.