You are here: Home / Poisonous and Medicinal Plants for horses / The castor oil plant (ricinus communis) – toxic seeds and great danger for horses 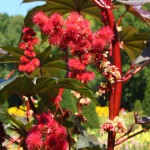 The seeds of the beautiful castor oil plant offer the substance ricin which is one of the most poisonous toxin on earth.

This toxic protein especially is dangerous for horses because it can be included in fertilizers and fodder. 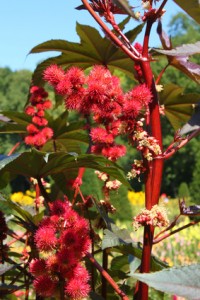 You can identify the castor (sometimes also called Palm of Christ) by its big and palmate leaves.

They grow in a variety of green and red colors. Additionally the fruits of the herbaceous plant are a characteristic feature.

These red, round and prickly plants are called castor beans and offer the toxic seeds.
They have the shape of a tick which also is the origin of the nomenclature (“ricinus”: Latin word for “tick”).

The plant blooms from august until october. 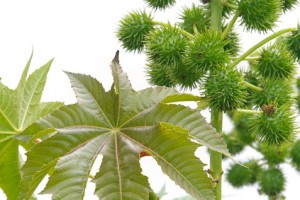 What are the toxic parts of the castor oil plant?

The pure consumption of the seeds already has poisonous effects and can lead to death. The toxic substance rizin is in the hull of the seed. Besides the consumption there is a further possibility that the toxic substances enter the body. The seeds get squeezed through a complicated separation process. The result of this procedure is the non toxic castor oil which especially is used in medicine. Besides this oil, further results of the process are residua. They offer a high concentration of the poisonous protein ricin and therefore the dangerous part of the seed. In the next production process these residua get heated so that they become detoxified. The final product of this procedure becomes an ingredient of some fodder mixtures and fertilizers. The main problem is that the heating does not guarantee the 100 % detoxification of the residua. Referring to this also toxic substances enter the fodder for the animals or certain fertilizers. Further potential origins for contaminated fodder are dirty agricultural machineries. After participating at the separating process they keep rests of the toxic substance ricin on their machineries. Afterwards they reap the normal grain and the ricin gets mixed with the harvest. According to this there is a great danger for horses, cattle, cows, sheep, pigs, goats, dogs and cats.

The toxic dose for horses that eat pure seeds is 40 g (about 60 seeds).

Symptoms for a poisoning

In most of the cases you can notice the symptoms several hours after the consumption. There is no antidote. The toxic ricin attacks the whole cardiovascular system until the heart finally stops to beat. Possible symptoms are:

In general horse owners need to be aware of the danger of the castor oil plant. An example of the history highlights how dangerous this plant is: the British army tried to use the plant for the fight against their enemies!