You are here: Home / Breed of Horse / Small but mighty: The American Miniature Horse 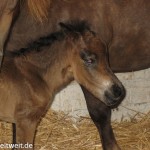 It can be a funny situation:

due to its size you first expect a dog but suddenly notice that in reality it is a horse – in mini-size!

Indeed there are several horse breeds of mini horses and even if every single miniature horse is fascinating the American Miniature Horse breed is unique.

Characteristics of the American Miniature Horse

The systematic breed of this horse species does only have one aim: to create the perfect horse in mini size. All proportions of the body and bones as well as the paces and the general characteristics are analog with a full grown horse. This may describe why some people call this breed an Andalusian Horse in small. Due to the balanced proportions and the strong musculature the small horses appear graceful and powerful. Much the same as their big idols you can use the mini horses in a variety of ways. They are patient, indulgent and they especially like to work with humans. Additionally the horses offer a great willingness to work. In general you can find the American Miniature Horse in all types of coat and eye colorations.

Where does the American Miniature Horse come from?

Surprisingly the American Miniature Horse originally does not come the US, but from Europe. In the 17. Century they were breed for the royal families in Europe because the little horses were supposed to be the playmates of the royal children. In the course of the turbulences and wars in Europe during the next centuries the mini horses became very rare until they were finally critically endangered. Some of them were exported so that we know about the first importation into the USA in 1888. First the animals were used for the mining. Their little size was very useful for the work in the small and narrow mining drifts. However, after some time some ambitious breeders identified the immense potential of this little horse species and began to breed them systematically. Concomitant with the breed they developed the ideal conception of a perfect horse in small. The mini horse got cross-breed with other Miniature species like for example the Welsh Pony, Hackney Horse, Falabella and Shetland-Pony. In 1970 the general studbook for American Miniature Horses was founded and the cross-breeding with other horse species was stopped and finally forbidden. Only eight years later the American Miniature Horse Association (AMHA) was founded and this lead to the complete establishment of the unique horse breed. This association understands itself as the responsible breed association and manages the general breed registration of the American Miniature Horses.

Who manages the breed register of the American Miniature Horses?

If you want to register your horse in the general breed register your horse needs to fulfill certain standards. The most important one is the size. The horse is not allowed to be bigger than 34 inches measured on the final hear of the withers. The way of measurement however can be variable. In Europe for example the size is simply measured on the highest point of the withers. Further required documents for the registration in the official breed register are the proof that both parents of your horse are also registered in the American Miniature Horse register and in some cases even a DNA-test. This registration process guarantees that there are no further cross-breeds in the blood line.

Once a year there the AMHA World Show (in former times also called Nationals) takes place in Texas. For a length of ten days the best American Miniature Horses compete in up to 150 different categories. The participants for this tournament already are a selection of the best horses which were able to win in the previous Qualification Shows. The different categories offer disciplines like trail, jumping, driving and sport and discipline categories. The ten best horses of each category are the so called World Top Ten Champions. Only these horses compete against each other in further tournaments to find the Twelve World Grand Champions. Finally, in the last and most exciting competition the very best of these World Grand Champions wins the entire Show and is called the World Supreme Champion.

Also in Europe you can find these kinds of National Shows. They are organized by the European Miniature Horse Association (EMHA) which is a platform for all American Miniature Horse breeders and horse owners in Europe. Besides the Nationals the EMHA also organizes other events and workshops.

What can you do with an American Miniature Horse?

Miniature Horses are small but usable in a variety of things. Due to their size they are very suitable for little children. Moreover a small horse can also be very attractive for old people because sometimes the care of a big horse can simply mean too much work. Besides, the mini-size horses are used more and more for the therapeutic horseback riding. Many patients are nearly scared by big horses so that small horses help to overcome the fear. Then the therapy can start directly.

Indeed it can be very tempting to forget that a Miniature Horse still is a horse. Due to its size you may think about a big dog but not about a horse. However: These horses are horses and this means that they need a species-appropriate husbandry. Even if the boxes in the stable can be a bit smaller than the boxes for a full grown up horse the mini horses need enough space for free run and other horses around them. Due to their ruggedness paddock boxes or other forms of an open box are ideal for the Miniature Horses. Horse owners need to be aware of the fact that this is not a big dog but a horse- just in mini size.