You are here: Home / Wild Horses / The Mustang – American Symbol of Liberty! 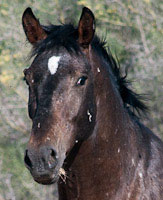 Having grown up with Winnetou and his loyal horse Iltschi, the Mustang has always been a symbol of liberty to me, mentioned in the same breath as USA.

Unfortunately we live in a materialistic world that doesn’t stop at the wild horses. Without mercy the wild horses are being rounded up by helicopters (click here).

What is man without the beasts?
If all the beasts were gone, man would die from great loneliness of spirit,
For whatever happens to the beasts also happens to man.
All things are connected.
Whatever befalls the earth befalls the children of the earth. 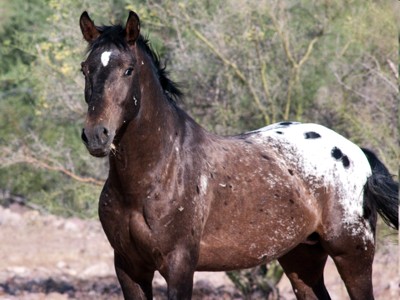 By now, 94 of these horses have died as a result of the roundup and 40 mares lost their foals, life that never had a chance.

….. and additional roundups are being planned ….

Horrible photos of the Mustang roundup find their way across the Atlantic and make protesters go to the barricades. In the news we see pictures of foals losing their mothers and stallions losing their herds. We see horses that break their legs or wear off their hooves on the hard ground to the point that only bloody lumps are left over and they have to be put to sleep. What remains are traumatized horses that are offered for adoption for the ridiculous price of 125 Dollars. Due to their horrible experiences they are often difficult to handle and therefore they go on a last trip to Canada or Mexico where they end up in the slaughterhouses.

On my trip through the USA I was fortunate to be able to observe wild horses in freedom in Nevada and Arizona – such beautiful animals:

Let’s start at the beginning:

The Mustang we know today descended from the horses of the Spanish Conquistadors  and settlers. Their name derives from the Spanish word “mestena”, which roughly means “stray livestock animal”.
Around 1860 about 2 million mustangs are thought to have lived in North America, and huge herds roamed the lands.
Their decline became imminent. It started with the introduction of barbwire in 1873. When pastures and watering holes got fenced in, the wild horses became excluded from these territories. The wild horses withdrew, and this was a good move because ranchers hunted these noble animals as they feared that there wouldn’t be enough rangeland left to feed their sheep, cattle, and other livestock. Shot down or captured, shipped off as war horses in the thousands, brutally abused in rodeos, then made into dog food … so sad …

But thankfully, there are people, who will speak up for those
who cannot speak for themselves

To facilitate that the resources of the West could be utilized freely, the Bush administration quietly modified some laws or simply bypassed them!
In the meantime, there are more Mustangs held captive in federal holding facilities than there are in the wild!

By the way – many people don’t know this, apparently that includes the BLM – but the horse is native to North America:
(see the interpretation of the BLM: Myth # 11: Wild horses are native to the United States.)

The species Equus originated in North America. About 1.5 million years ago Equus reached Eurasia via the Bering land bridge. It is unclear whether the various types of
Equus that lived during the middle and late Pleistocene were subspecies of today’s Wild Horse already or whether they were still a separate species. For the most part, the different types are distinguished only on the basis of body height. Some of the horses that were widespread in North America until the late Pleistocene could possibly have belonged to the same species as the Wild Horse (Equus ferus). About 10,000 years ago however, all horse species on the American continent went extinct.

Here some interesting websites about the Mustang Horse: