This disease is scary and frightening for every horse owner. The Equine Atypical Myopathy is a muscle disease and leads to the death of the horse.

This can only take some hours or at the latest three days. Until today the origin of the disease is not clarified. However two things are for sure. It only affects horses on the pasture and only after a sudden cold snap over night (night frost).

The biggest problem of the equine atypical myopathy is the fact that until today researchers are not certain about the origin of the disease. Therefore they only collected all information about the past cases of this disease and summarized the similarities and differences of the dead horses and the respective pastures. There are some theories about the origin but some seem more and some less logical.

Equine Atypical Myopathy in the past

We know about dead horses one hundred years ago which were found on the pasture the next morning after a night of a sudden cold snap. In 1984 the mysterious disease was named “Equine Atypical Myopathy”(“myopathy” is the scientific term for a muscle disease). In the winter of 1995/96 the School of Veterinary Medicine in Hannover/Germany knew about 115 horses with the disease. In that winter period 111 horses died. A similar number of deaths are known from the winter 2004/05 and 2009/10. The dates clarify that the disease does not appear in a periodic cycle. In opposite to this it is just unpredictable.

What were the conditions for the disease?

The origin of the disease is not clarified what makes it difficult to describe its exact conditions. Fact is that the horses always died after a sudden cold snap over night. This means that horses are in danger in the period between October and December because at this time there is a great difference between the warm temperatures at day and the cold ones at night (night frost). Additionally we know about cases when horses were affected by the disease after a wind storm combined with a high humidity and temperatures only low above zero degrees.

Which horses are in danger?

In general all kind of horses can be affected by the Equine Atypical Myopathy. It still is not clarified in how far the breed, sex and the physical condition of the horse influence the disease. However, it always affected all horses of a pasture and not only a single one. Some scientists say that horses in the age between one and four years especially are susceptible for the Equine Atypical Myopathy. All horses which suffered from the disease were well-fed, less trained and did not get additional fodder (hay, pellets, minerals). Many of the affected pastures were grazed a lot, not fertilized and the responsible persons did not regularly collect the feces from the pasture.

Which regions are affected by the disease? 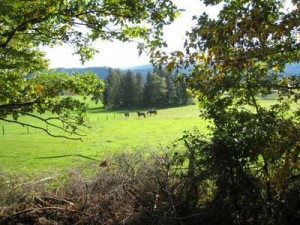 The first cases of the Equine Atypical Myopathy we know about were in Great Britain.

Until today the disease was already diagnosed in the whole Middle European territory including Switzerland, Austria, Germany, Scotland, Belgium and the Netherlands.

However, there is no certain region or area which was affected regularly. All the respective pastures had two things in common: their local position was close to the forest and there was no professional cultivation on them since a long time.

The exact origin of the Equine Atypical Myopathy is not clarified. All speculations have in common that there must be a certain toxin which is set free through the sudden cold snap. This can happen through two different ways. The first one is that the climate change effects a change of the metabolism process in a certain plant and through this the production of a toxin. Referring to this the toxin would enter the organism through the fodder. The second possible theory is that a sudden cold snap affects a high production of certain bacteria in the stomach and intestine of the horse. These bacteria are poisonous and attack the whole cardiovascular system. The big question is the biochemical activator for the production of these toxins- and until today this question could not be solved.

In the course of the research scientists found out that there often were sycamore maples near the affected pastures. The leaves of this tree contain a high concentration of amino acids. When they enter the organism they become toxic substances through metabolic processes. The horse health service found out that there were sycamore maples on seven of eight affected pastures. In autumn they lose their leaves which fall on the pasture and become accessible for horses. Additionally scientists found out that in 2004 and 2009 there was a great production of seeds of the sycamore maple. This fact could explain why there was the high number of death horses which suffered from Equine Atypical Myopathy in that winter periods. However, this theory does not explain the obvious correlation with a sudden cold snap (night frost). Therefore it does not give us the final explanation of the mysterious disease.

The symptoms of the Equine Atypical Myopathy need to be noticed really quickly. Even if the death rate is between 85-90 % you can still save the life of a horse if you directly start with immediate life-saving measures. In general the symptoms are really similar to any other kind of a muscle disease which means a weakening of all parts of the musculature. The symptoms can easily be mixed up with the symptoms of a colic because in both cases the horse suffers from cramps. The first hints are problems with swallowing and a dark red or brown urine (the color originates from the secretion of the myoglobin). Further symptoms are:

All horses suffer from pain but the intense can vary from horse to horse.

In most of the cases the horses are found death on the pasture the next morning. This is a terrible situation and even if medicine did not find a cure for the Equine Atypical Myopathy until today, immediate life-saving measure can save the life of the animal. If you find an ill horse you immediately need to call a vet. After that the horse needs an intravenous therapy and a warm blanket. If possible you need to try to transport the horse into a warm and dry stable. There you feed dry hay and anti-inflammatory medicine. Most of the horses have great pain so that they should move themselves as less as possible.

Even if this disease is really mysterious and frightening one should not worry too much or have panic. Every year much more horses die due to less movement. These horses live in a small box and suffer from a colic. Generally prevention is the best way to fight against the Equine Atypical Myopathy. The most important measure is to regularly check the weather forecast. In case of an announced cold snap horses should stay in the stable over night. If there is no stable available you can organize a guard for the night. Through this the horses can be checked regularly. On the pasture there needs to be a shelter with some additional hay where the animals can find a dry place.

The Equine Atypical Myopathy seems like a bad movie- and one can just hope that scientists will soon find out more about this mysterious disease!