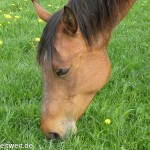 Pastures are full of parasites and maggots so that horses easily eat them with the normal grass.

Parasites can cause a worm infestation, allergies and a weak immune system.
Therefore it is crucial to know more about these small animals.

In general there are more than 40 different species of strongyles. The length can vary between 0.2 to 0.98 inches. These worms especially accumulate in the large intestine. The female worms lay eggs that are excreted with the normal fecal. The horse dropping fall on the pasture and after 15 days the eggs become larvae. Horses that graze on the pasture easily eat these larvae and so that they reenter the horses´ organism. This time they settle down in the walls of the large intestine and after six more weeks of growth they finally become worms. These worms begin to attack the gut flora and cause fatal diseases. The life circle of the worms clarifies that especially horses on the pasture are in danger of a possible parasite infestation. During their growth time in the walls of the large intestine one can hardly attack the parasites because most of the medicine only attacks the worms in the intestine. The larvae, however, continue to grow until they finally, in form of a worm, reach the intestine. The medicinal treatment only is effective if the medicinal substance includes special toxins against larvae. Symptoms for a strongyles infestation are colic, diarrhea and a loss of weight.

This very big strongyle species can reach a length of 0.7 to 2.0 inches. The life cycle of the larvae is the same as the live cycle of the larvae of the small palisade worms (see above). The only difference is that they do not only settle down on the wall of the large intestine but drill through it. Then they enter the blood vessels and finally settle down on vascular walls. After four months they reenter the intestine where they lay their eggs. Due to their long tour through the organism they damage vascular walls and cause blood clots. In the end this can lead to vascular disorders, colic and limping. If the horse already exhibits these symptoms the medicinal treatment will hardly be successful. Further symptoms are diarrhea, loss of weight, lackluster coat, lack of appetite, anemia, fever and general lack of power.

The name of this worm species already explains their appearance. These worms are extremely long – the species “Parascaris equorum” can even reach a length of nearly 20.0 inches!

The worms lay their eggs in the intestine of the horse. These eggs are able to survive for several years in the bowl of the horse! A grown up giant roundworm can produce several thousand eggs a day. The larvae hatch out in the small intestine from where they start their round trip through the horses´ organism: First, they settle down in the liver. After one week they enter the blood and finally reach the lunge, bronchus and throat. Afterwards, the larvae return to the intestine where they reach their final length. This entire process can take up to 16 weeks. The larvae damage intestinal walls and especially the lunge. A deworming only is effective and successful if the larvae are in the intestine. During their round trip through the horses´ organism there are no medicinal treatment possibilities. Also a fecal sample does not give any hints for a possible parasite infestation. Giant roundworms live everywhere in the horses´ environment. Therefore the only effective prevention is a regular and consequent deworming and a minimum of hygienic in the horse stable. Symptoms are difficulties in breathing, coughing, a lack of appetite, diarrhea, a lack of power and energy, a lackluster coat and colic.

These worm species reach a length of up to 4.0 inches. Normally this development process takes four months. Pinworms stay in the intestine. Female worms move towards the anus. They lay their eggs on both sides of the end of the anus. This makes it easy to remove the eggs: You can simply take a disinfected sponge and carefully clean the horses´ anus.

This parasite is life-threatening for foals. The entire growth period only takes two weeks. Foals can get infected via the breast milk of the mare. Referring to this the foal is in danger for the first seven weeks of its life (after the first seven weeks the foal changes its nourishment from milk to normal fodder). During this period the immune system still is very weak and not able to defend the organism against the parasites. After some months, however, the immune system becomes stronger and is able to prevent dangerous infectious triggers. Typical symptoms are diarrhea, an inflammation of the small intestine and a damage of the lung.

Gasterophilus is an insect whose larvae are very aggressive and harmful for the horses´ organism. The larvae especially grow in the time between December and March. Therefore the medicinal treatment needs to take place at the end of November or the beginning of December and needs to be repeated regularly. The Gasterophilus insect lays its eggs between July and September and places them on the legs of the horse. The eggs cause an itch and the horse begins to lick its legs so that the parasites easily enter the organism and the stomach. The best prevention is an attentive horse owner. As soon as he notices that the legs itch and that the horse starts to be nervous or tries to lick the legs he should control the legs. Eggs can be removed with a trimming knife for dogs. Moreover the horse needs to be groomed carefully and regularly. In summer one can wash the horse with neem oil products (a cold shower can be very refreshing after a long and sweaty ride). Typical symptoms are a lack of power, colic and anaemia. The symptoms are similar to the symptoms for an allergic reaction. Therefore one can only start with the correct medicinal treatment after a detailed examination by the vet.

Prevention measurements against a parasite infestation

The only possible and effective prevention is a regular deworming. This requires discipline and endurance of the horse owner. But then, however, the horse will stay healthy and powerful.